Babies prefer the revving engine of an Acura NSX more than any other Honda past or present, according to an adorable yet technically rigorous study by the Japanese automaker.

Honda, with its typical hyperfocus on engineering, was not about to sew together any old plush toy for this kind of test. Its prototype Sound Sitter looks like a classic Honda S600 but carries a built-in speaker that can be activated by a smartphone. (Apparently the look of the NSX didn’t appeal to babies quite as much as the sound.) Starting with physiological research on “sedative” sounds that calm newborn babies and young infants, Honda recorded the exhaust notes of 37 cars across six decades of its history. We’re talking obscure Japan domestic-market cars that Hondaphiles in America could only dream of starting, such as the 2002 NSX-R, the 1974 Life, the 1983 Ballade Sports CRX, and Honda’s first production vehicle, the humble, mid-engined T360 pickup from the 1965 model year. Even the 1994 Odyssey minivan wasn’t as baby-friendly as the 2018 NSX, which Honda deemed most accurately re-creates the muffled, low-frequency hums that a baby hears in its mother’s womb. As much as we complain about turbochargers muffling engine sounds, the youngest generation apparently has taken them to heart.

Using the engine sounds as sampled in hi-fi, Honda engineers played them for a dozen babies, aged six to 16 months, as soon as each baby began crying. They measured heartbeats and respiratory patterns while the engines revved near the babies for two minutes. While not so scientific—Honda mentions, and everyone knows, that babies on empty stomachs or with full diapers can’t be expected to relax—the researchers found 11 of the 12 babies were noticeably more relaxed when listening to a twin-turbo 3.5-liter V-6. 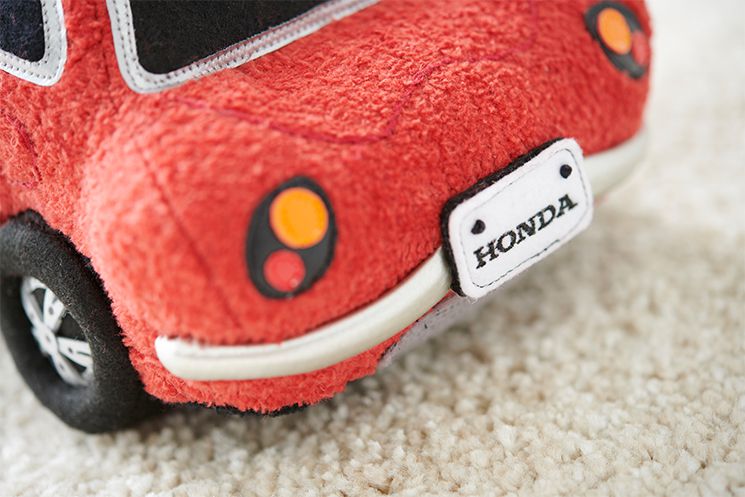 But despite how calming the new NSX can be, it’s not as cuddly or cute as the S600 coupe from the 1960s. That little car, right down to its inset amber lights within the slatted grille, provided inspiration for the hand-sewn Sound Sitter. Currently, the plush S600 is not for sale in Japan or elsewhere. Given such intense work for a one-off toy, we’ll bet Honda will relent to mass-producing this pillow—and we’ll also bet some babies will prefer hearing the Integra Type R at redline.